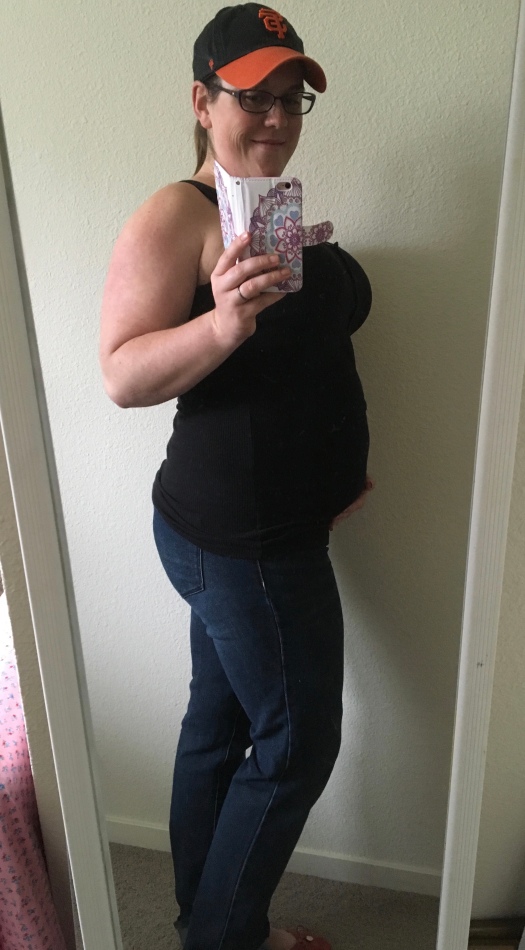 How big is baby?

Baby Starks is now the size of a small eggplant! He also weighs about one pound now, and everything I read tells me that he will continue putting on weight rapidly from here on out.

People familiar with NICU life will also notice that this week marks another milestone: viability. Heaven forbid, if our little man were born today, he could survive with excellent medical care. But we have no reason to suspect that he will do anything but stay put and keep cooking just as long as he’s supposed to, so we’re not going to focus too much on that. 🙂

These days, the name of the game is overall discomfort. Even though I generally don’t feel sick, heartburn aside, my body is just never comfortable anymore. Bending over to pick things up or tie my shoes is becoming quite the chore. Sleeping has become difficult again, even with the giant body pillow, especially since whichever arm I wind up lying on is always numb by the time I wake up. I’ve also noticed that I feel generally warmer than usual, too, which means more sweating and panicky feelings if my surroundings seem too hot or stuffy – and it’s summer, so of course this is the case all too often.

Despite regular visits to the chiropractor, I usually wind up with some kind of back or hip discomfort by the end of the day, too. If I sit too long, the right side of my back hurts. If I walk around more, I wind up with shooting pain down the left side of my butt. Either way, most days the very center of my back winds up tight and uncomfortable.

And true to all the pregnancy horror stories we’ve all heard, I have to pee all the time. I’ve always had a small bladder, but now, with a tiny human putting constant pressure on it, I find myself in the bathroom every 15 minutes if I’m doing a lot of standing or walking around. For instance, at the gym I get about 15 minutes of cardio before I have to run to the bathroom, and then I usually have to take another break somewhere in the middle of my weight routine, and then again before I stretch. Annoying! And I have now officially become that person who asks whether there will be a bathroom where we are going and how close it will be, and who has to use one right before we leave. Between that and food, sometimes it seems like all I think about! 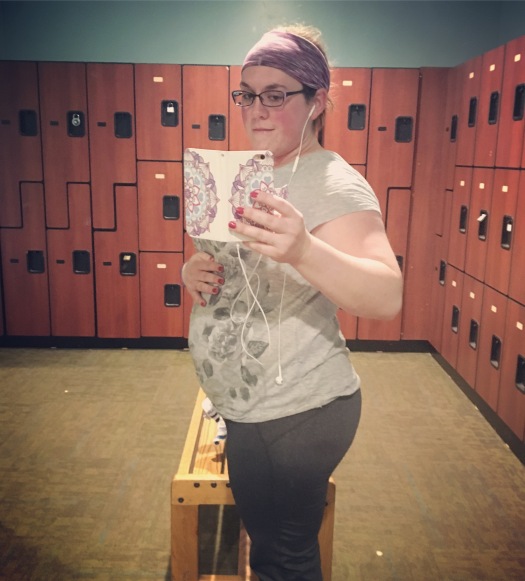 This last week in particular has been extra difficult, too, because I came down with yet another cold. Coughing, sneezing, body aches… waking up choking, and getting winded just walking down the hall… it’s even been kicking Robbie’s butt for the last several days, too. Most years I get one cold in the spring and one in the fall and I’m good the rest of the year… this year I seem to catch everything that goes around, as this is the fourth time I’ve been sick in 6 months. I take my vitamins, I wash my hands on the regular, I get as much rest as I can… and still sick. I hear that sometimes a woman’s immune system becomes suppressed during pregnancy to keep her body from attacking the baby. And if that’s the case, well… good thing you’re worth it, little man.

Any other interesting things happening? 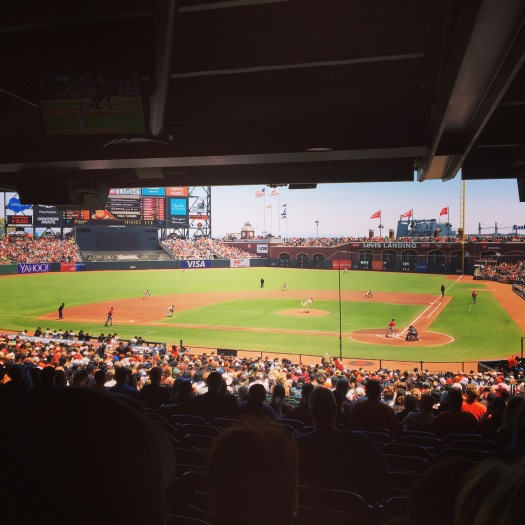 Baby got to go to his first baseball game! Robbie and I went to see the Giants play the Nationals, and the little guy kicked me the whole time. It’s hard to say whether it was baseball or the garlic fries that had him all excited, but he seriously didn’t stop moving during the entire game.

And because of course, we bought him his first Giants gear! We settled for generic (aka, inexpensive) onesies, but it was really tempting to get him a Buster Posey jersey or an adorable letterman-style jacket. (Don’t worry… big brother got a cool shirt and a backpack, too.) 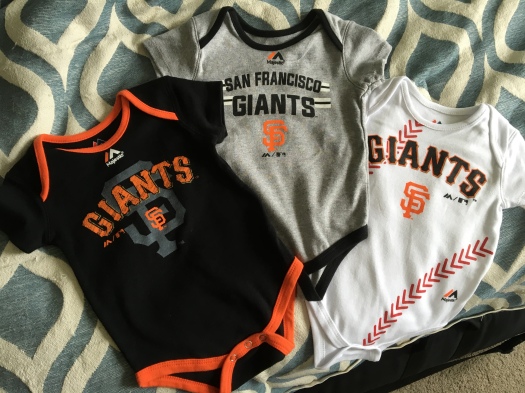 Thankfully we agree on baseball teams, because football… football is a different story. Please send all the adorable Broncos stuff you can find, to drown out the disgusting amount of 49ers gear Robbie is sure to inflict on this poor kid!

We’re also slowly acquiring some nursery furniture (even though the “nursery” is going to be a corner in our bedroom). We’re trying to be smart and frugal, so we’re getting a lot of these things second-hand. I’m part of a local “garage sale” Facebook group, and it’s been great for finding gently-used things for a good price.

For instance, we recently picked up this dresser, which will do double-duty as a changing table once we put a pad on it. 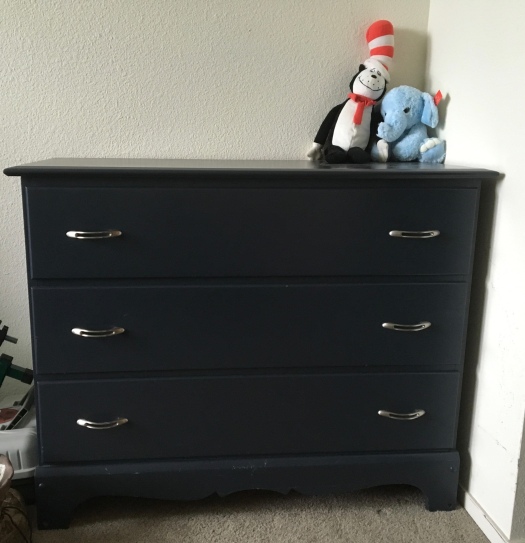 There’s also this MamaRoo swing, which we got for less than a quarter of what it goes for new. We use these things in the NICU, and they are awesome! Once I wash the cover, it will be perfect. (Also, I’m honestly surprised I haven’t found one of the cats in it yet, haha!) 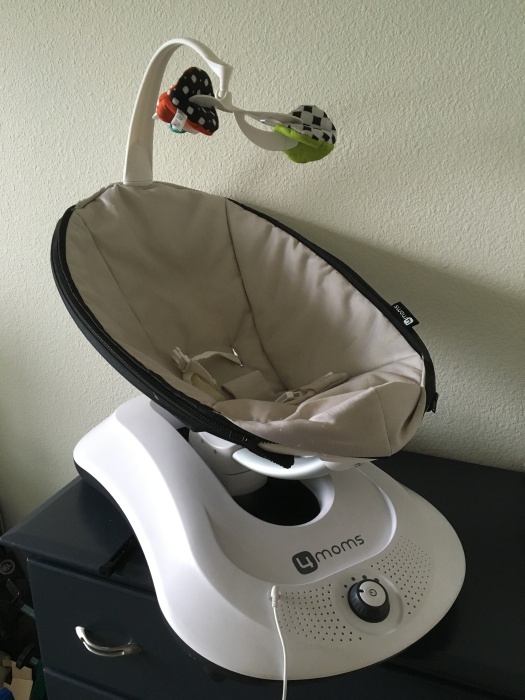 And yesterday we picked up this Ikea crib for only $60! The people who we bought it from say that their son only used it a handful of times, so it’s basically brand new. And after pricing new cribs, it’s a relief to have acquired one for so cheap! We still have to pick up a mattress (this picture was before we took it apart to transport it), but that will be easy now that the bulk of the cost is out of the way. And another cool bonus: it came with the rail to convert it to a toddler bed when we’re ready for that. Score! 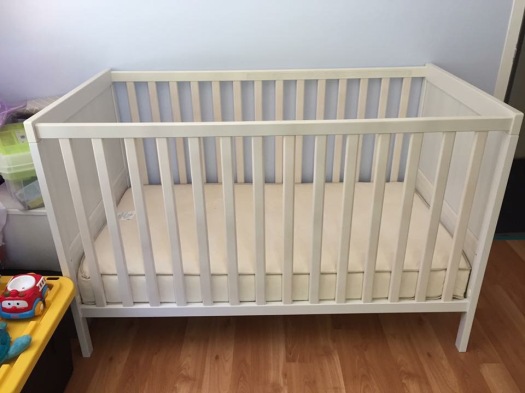 We also got this awesome Pack-N-Play set for a steal during AmazonPrime Day last month. It’s still in the box since we won’t need it for a while, but again, really nice that we didn’t have to shell out full price for it.

And before anyone asks, don’t worry, the car seat will be one thing we definitely buy brand new. 🙂 I might also suck it up and buy the stroller new, too, since it will get so much use and we’re likely to be hard on it. 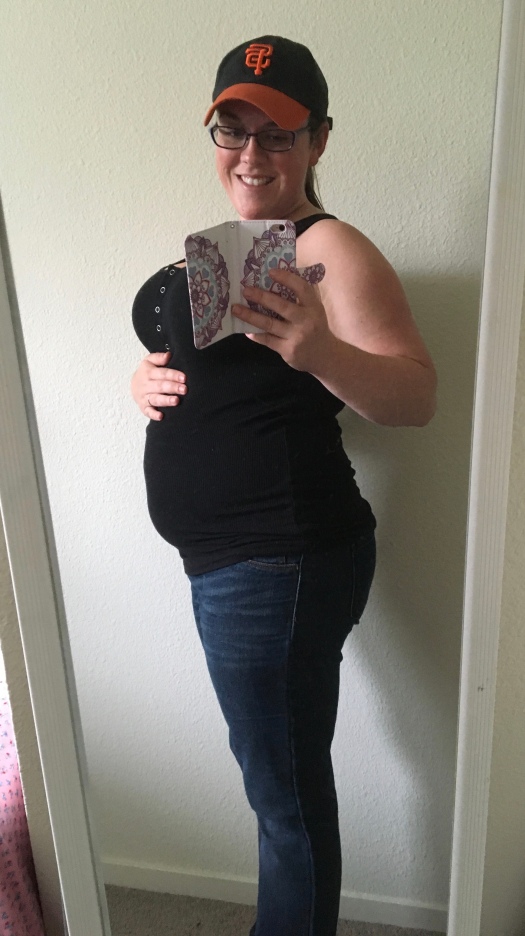 And that’s pretty much it for this week! We’ll just keep growing and preparing until next time… see you for week 25!