Hello friends! It’s week 27, so please join me in doing a little happy dance for the last week of the second trimester!

How big is baby?

Baby is the size of a papaya, about 14 inches long, and weighs in at around 2 pounds this week! That’s around 1 kilogram, which my NICU friends can agree is a big milestone!  And I don’t doubt that he really is that big, as my belly keeps getting bigger and bigger every day. As my friend, Savannah, so eloquently described her own baby bump… it’s beginning to feel like it’s leading me around, haha!

For the most part, I don’t feel too bad these days. Heartburn is a constant, no matter what I eat. It does make me pretty grumpy at times, because it just will. not. go. away. But I am sleeping better since my last post, for whatever reason, and that has definitely helped with all of the negative emotions I had been struggling with. 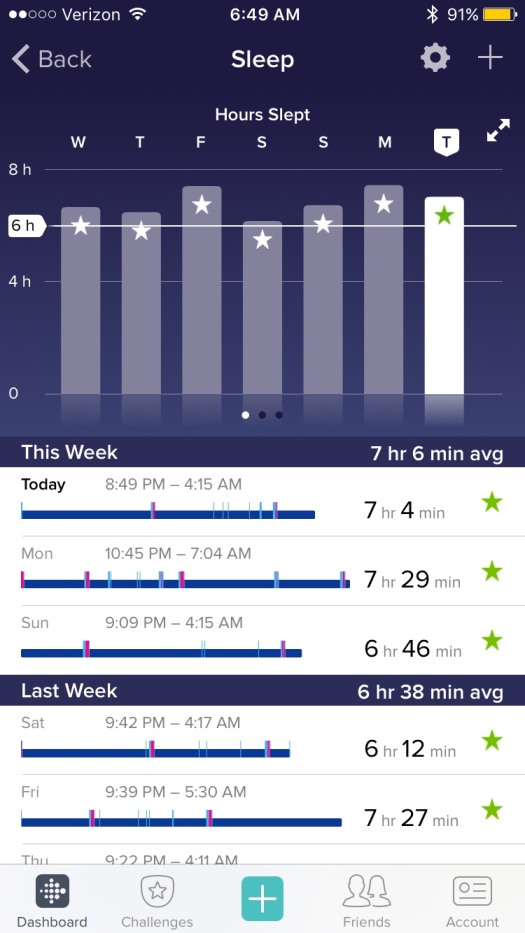 Other minor complaints include having intermittent numbness in my right hand. This has been going on for a few months now, and when it first started it only seemed to occur when I had my arm bent for long periods of time, like sleeping with my hand behind my head. But lately it’s been happening at more random and inconvenient times, like when I’m bagging a baby at work or writing something down. Weekly trips to the chiropractor have helped a little bit, thankfully.

Also, some of those pesky complications I’ve been so worried about are starting to pop up. I have my fasting glucose test tomorrow, and, mostly out of curiosity, I’ve been testing my glucose at home intermittently this week… and based on the readings I’ve been getting, I’m 99% sure I’m going to get the official gestational diabetes diagnosis when I go in. I was all prepared to resist the constant stream of treats in the break room at work, but I have to be honest… the high reading after eating a protein-heavy breakfast burrito this morning surprised me. Looks like no more flour tortillas for me. It’s going to be an interesting next few months, for sure.

I’m also trying to keep a close eye on my blood pressure. It’s actually been low for most of my pregnancy so far, but it’s started creeping up to normal and sometimes even high-normal numbers in the last couple of weeks. And I know that now is the time when we can start really seeing it climb. So I’m watching it closely, and mentally preparing myself to give up my one daily cup of coffee that gets me through the afternoon slump. Sigh. 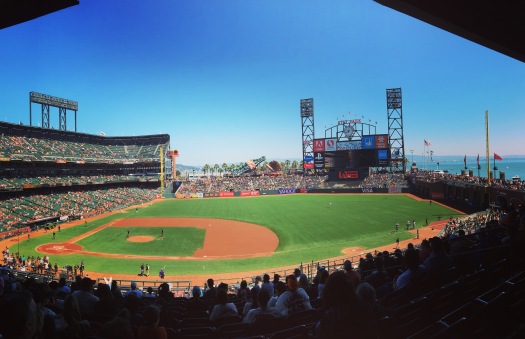 Robbie and I went on a quick, sort of impromptu “babymoon” a couple weekends ago. We had already planned on going to see the SF Giants play the Braves that Sunday, but Saturday afternoon, after we dropped James off with his mom, we decided to go spend the night in the city just because. We drove up beautiful highway 1, and spent the night at the fun, very modern Aloft hotel. It was nice to be able to sleep in and not worry about hustling to get to the game in time. We even got to the park early enough to walk around and check out parts we’d never seen before. We had splurged on awesome, club-level seats, and the view was amazing! And the game was awesome, too… especially that epic 8-run 7th inning. In the end, it seemed worth every penny. 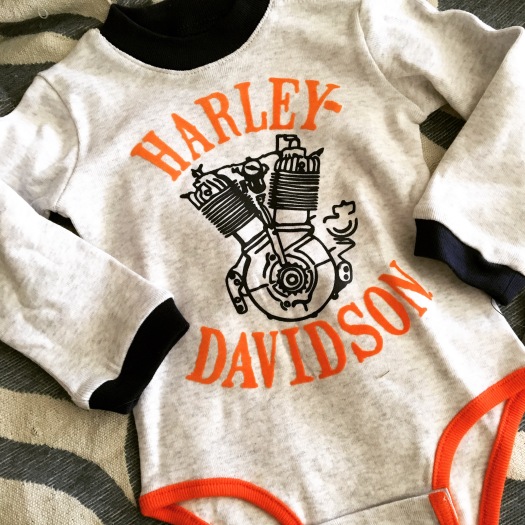 We are also starting to get some really fun baby gifts! Including some really adorable Harley clothes like this one from (guess who!) my mom and Scott. And I’m getting super excited about seeing my family for my baby shower in just 2 weeks, eek!

…see you next time!